I’m really impressed by these three mini-trailers that were just released this past week.  No doubt that there is a strong correlation here between the impending release of GTA 5 and Rockstar parent, Take-Two Entertainment’s, stock price in the past nine months. 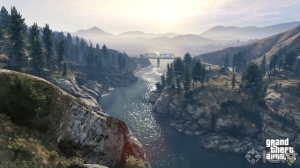 What’s most impressive about the three character approach is that it’s obviously meant to remedy deficiencies in the story-telling of GTA’s San Andreas.  San Andreas is a great game, but the narrative struggled with developing an identity for the main character, CJ.

This problem is partly due to the RPG and customization elements in the game that give the player the choices to make CJ look like a gang-banger, a CEO, or a construction worker (also there is that weird S&M outfit…).  San Andreas is such a big place, that after the first act, CJ just sort of feels out of place.  The entire San Fierro (San Francisco) and Las Venturas (Las Vegas) portions of GTA: San Andreas feel aimless.  CJ’s story starts and ends in the same place, his hood.  That’s the point.  After a very long detour at the end of the first act, the final mission takes you back there to confront characters you haven’t seen 100 hours of play time.  It’s incoherent.  Fortunately, the meat and potatoes in between are a lot of fun.

If San Andreas is 3 times bigger than it needs to be, why did Rockstar bother making all that extra stuff?  The answer appears to be an obsession with attention to detail.  San Andreas is LA, San Francisco, and Las Vegas because it’s trying as hard as possible to capture and satirize the Southern California 90’s zeitgeist, even if CJ’s world is naturally a little bit smaller.

I remember seeing GTA3 and just being completely amazed by the size of the game.  In the past 10 years there have been a lot of knock-offs of the GTA style of creating huge worlds, but all seem to suffer from the same flaw of confusing physical space with scale.  What you won’t really appreciate until you’ve run down every alley looking for hidden packages is that a gigantic portion of every GTA game is hand-made.  There is not a lot of 3D modeling copying and pasting.  There are no identical city blocks.  GTA4 even features a huge fake-internet.  It’s the attention to detail that separates GTA from every other massive game world.  Other developers just don’t do this, not even Bethesda. 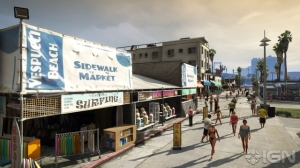 GTA4 marks a big evolution over San Andreas, even if it isn’t as large and vast as its predecessor.  The major difference in GTA4 is the emphasis on social perspective, and I don’t mean multiplayer or or Twitter.  GTA4 lets Liberty City be defined through the eyes of its characters.  Activities open up depending on who you’re hanging out with and what you’re planning on doing.  And engaging with the people you’re working with is part of the experience as opposed to just getting a cell phone call and showing up.

And GTA5 promises to be somehow significantly larger yet again.  The obvious approach to reconciling South Central gang warfare, with pot growing up in the red woods, and the glitz of Beverly Hills is to tell the stories of those places through the eyes of separate characters.  GTA4 maximizes the story of Liberty City the same way, through different characters, albeit only through downloadable content, but the premise is the same.  The world of Luis Lopez, and the club scene of Liberty City is very different from Niko’s darker struggle to get revenge.  To tell the story of a heavily satirized California it is necessary to have many different perspectives, in the same way the DLC tells a broader story about Liberty City through its three characters.

This obsessive attention to making everything perfect is exactly why concerns about juggling three separate characters are likely to be unfounded.  Three times the characters makes three times the amount of narrative scope, and three times the opportunity to force interaction with a gigantic world.  It’s a very deliberate choice that is clearly a response to maximizing the incredible amount of content GTA5 will offer just because, well, it’s Rockstar.  I can’t think of any other series that is virtually guaranteed to get better with each installment, other than GTA.  Given the additional PS3 and XBox console penetration compared to 2009, GTA is again going to be breaking its own sales record come later this year.